Cabochons Fashioned from the Shell of Crassostrea Virginica 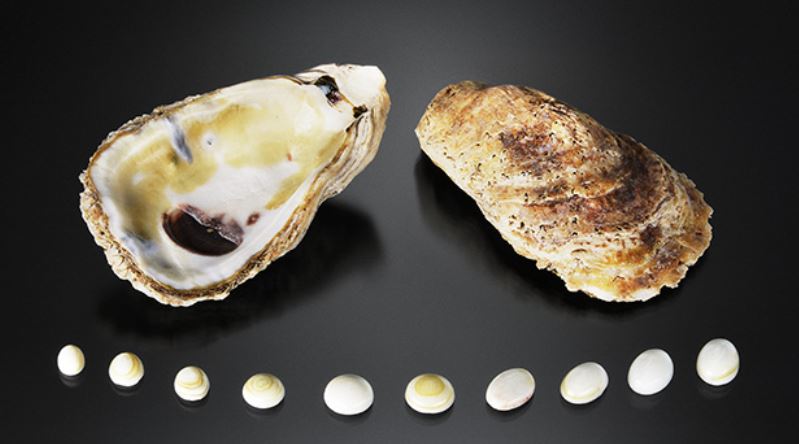 Figure 1. The ten cabochon-cut gems examined are shown alongside the valves of C. virginica (Eastern or American oyster). The interior and exterior valves shown belong to one oyster. Photo by Diego Sanchez; samples courtesy of Anne Dale.

Crassostrea virginica, the so-called Eastern or American oyster, is a commercial seafood widely distributed along the east coast of the United States to the Gulf of Mexico (“Indian River Lagoon Species Inventory,” Smithsonian Marine Station at Fort Pierce, 2008, https://www.sms.si.edu/irlspec/Crassostrea_virginica.htm). Connecticut, Virginia, and Mississippi have all designated the Eastern oyster as their official state shell, and cabochons cut from this bivalve are the official state gemstone of Louisiana (http://legis.la.gov/Legis/Law.aspx?d=103557). These specimens are marketed under the trade name LaPearlite.

Figure 2. Left: A 3.09 ct cabochon showed various surface structures consisting of a non-directional patchwork of cells near the center to a broad mottled appearance in the outer area, together with natural brownish layers of shell formation. Right: Higher magnification of another cabochon’s surface revealed a distinct patchwork structure. Both samples displayed a whitish sheen on the surface when illuminated with a fiber-optic light. Photomicrographs by Artitaya Homkrajae; fields of view 11.90 mm (left) and 5.24 mm (right).

The Carlsbad laboratory received ten LaPearlite cabochons together with a shell for examination (figure 1). The cabochons exhibited low domes and flat bases and ranged from 1.65 to 6.12 ct. They measured from 6.85 × 6.60 × 3.80 mm to 14.40 × 10.30 × 5.30 mm and possessed non-nacreous surfaces, with the majority displaying a natural brownish yellow banded structure typical of shell formation. Microscopic examination revealed that the main white surface and subsurface structure varied from a patchwork of nondirectional cells or segments to a broad mottled appearance within individual specimens, as well as from specimen to specimen. These structures exhibited a reflective whitish sheen when illuminated by a fiber-optic light or other bright oblique lighting, creating a shimmery phenomenon (figure 2). A similar patchwork pattern has been noted on scallop pearls and shells of the Pectinidae family (K. Scarratt and H.A. Hänni, “Pearl from the lion’s paw scallop,” Journal of Gemmology, Vol. 29, No. 4, 2004, pp. 193–203). Under long-wave UV radiation (365 nm), the white portions of all the cabochons and the shell were inert, while the yellow portions showed a weak to moderate yellow fluorescence, and the shell’s dark purple adductor muscle scar exhibited a weak red fluorescence.

Raman spectra of the white and purple areas of the interior of the <em>C. virginica</em> valve.

Raman spectra of the white and purple areas of the interior of the <em>C. virginica</em> valve. 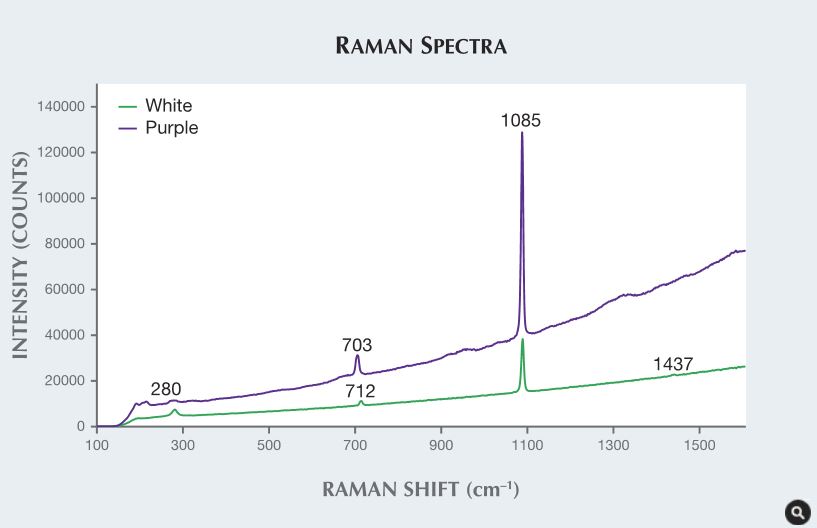 Figure 3. Raman spectra collected using 514 nm laser excitation on the white and purple areas of the interior of the C. virginica valve. The white area shows calcite peaks at 280, 712, 1085, and 1437 cm–1, and the purple area shows aragonite peaks at 703 and 1085 cm–1, along with several broad pigment-related bands.

A PL spectrum collected on a purple area on the interior of a <I>C. virginica</I> valve displays clear triple bands related to the porphyrin pigment.

A PL spectrum collected on a purple area on the interior of a <I>C. virginica</I> valve displays clear triple bands related to the porphyrin pigment. 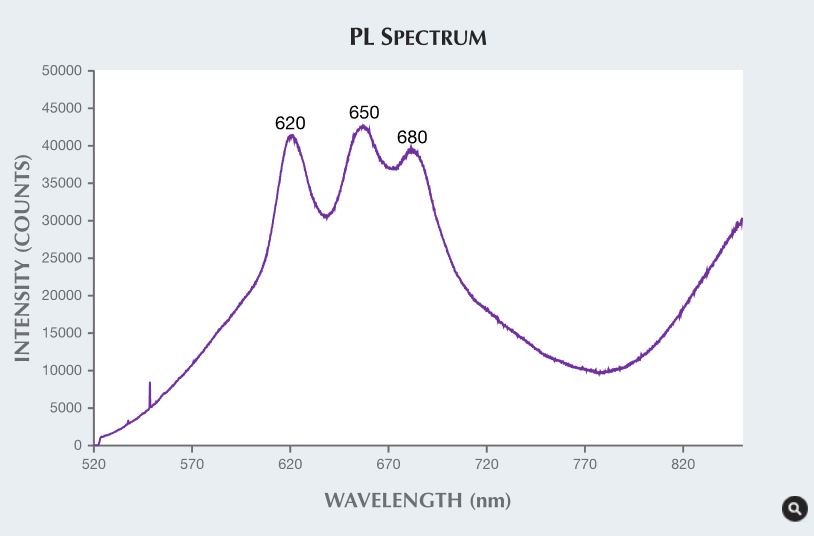 Figure 4. A PL spectrum collected using 514 nm laser excitation on a purple area on the interior of a C. virginica valve displays clear triple bands at approximately 620, 650, and 680 nm related to the porphyrin pigment.

Raman spectroscopic analysis with a 514 nm argon-ion laser subsequently verified that the white and yellow portions of the cabochons and shell were calcite with peaks at 280, 712, 1085, and 1437 cm–1. No peaks indicating the possible presence of pigments were detected in the yellow areas. Moreover, Raman spectra collected on the shell’s dark purple adductor muscle scar produced aragonite peaks at 703 and 1085 cm–1 along with several relatively weak broad pigment-related bands (figure 3). PL spectra collected with 514 nm laser excitation on the same areas showed clear triple bands at approximately 620, 650, and 680 nm (figure 4). The PL spectra and fluorescence reaction indicate the purple color is associated with the pigment porphyrin (Y. Iwahashi and S. Akamatsu, “Porphyrin pigment in black-lip pearls and its application to pearl identification,” Fisheries Science, Vol. 60, No. 1, 1994, pp. 69–71; L.H. Arma et al., “Red fluorescence lamellas in calcite prismatic layer of Pinctada vulgaris shell (Mollus, bivalvia),” Optical Materials Express, Vol. 4, No. 9, 2014, pp. 1813–1823). None of the studied cabochons showed purple areas to examine for comparison. Interestingly, the Raman spectra obtained from the white and purple areas of the same mollusk that were previously referenced in the literature (K. Scarratt et al., “A note on a pearl attached to the interior of Crassostrea virginica (Gmelin, 1791) (an edible oyster, common names, American or Eastern oyster),” Vol. 30, No. 1/2, 2006, pp. 43–50) differed slightly from the findings in Journal of Gemmology this work. The samples in this submission were also analyzed by energy-dispersive X-ray fluorescence (EDXRF) chemical analysis and showed low levels of manganese (Mn), confirming their saltwater environment.

As with all shell mollusks, C. virginica is capable of producing pearls. However, the cabochons in this study provided useful gemological and spectroscopic information for future reference that can no doubt assist with identifying the composition of pearls produced by the mollusk (C.P. Idyll, “The pearls of Margarita,” Americas, Vol. 19, No. 8, 1967, pp. 8–14). Although the samples could be mistaken for agate at first glance, owing to their distinctive banding, it would soon be apparent that they were pieces of fashioned shell. The samples demonstrate how creative work can turn nature’s beauty into an attractive gemological material.