(Syn Emerald) How to Recognize a Fake Emerald Gemstone

Emeralds are among the most beautiful and prized gemstones, and many people want to have them in their jewelry collections. However, a lot of stones sold as emeralds are actually fake. Let’s see how you can recognize such emerald imitations.

Natural emerald is a green variety of the mineral beryl. Emeralds are relatively hard (7.5-8.0 on the Mohs scale), but since most natural stones of this kind usually have a lot of internal imperfections, they are easy to break if hit. 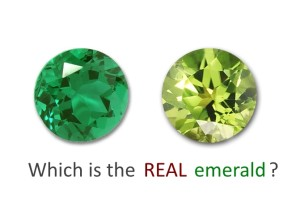 What Is a Fake Emerald?

A fake emerald is any stone that has a different chemical structure from that of a real emerald.

Fakes can be made of a variety of materials, both synthetic and natural.

Sometimes, cheaper natural gemstones such as peridot or garnet are sold as emeralds.

Colored glass can also be used as an emerald imitation.

Synthetic Emeralds: Are They Fake?

Synthetic emeralds are created in a lab, and since these stones have the same chemical structure as natural emeralds, synthetics are not technically fake.

Click here to see a selection of synthetic emeralds.

You should know, however, whether the emerald you are buying is lab-created as these stones are cheaper, and if someone sells you a synthetic emerald at the price of a natural one, you may not be getting a good deal.

Compared with natural emeralds, synthetics usually look cleaner as they don’t have as many visible internal flaws as their natural counterparts.

Many (but not all) synthetics also exhibit a red glow when lit with ultraviolet light (this is not a definitive test, however, as some natural emeralds also glow red in such conditions).

Although there are some clues that can help to recognize artificially created stones, it is very hard to tell whether an emerald is synthetic or natural just by looking at it.

Usually, the best way to have a definitive answer is to test the stone with special equipment. So, if you want to know with certainty, ask for a certificate documenting the origin of the stone, or send the gem to a lab for analysis.

Check out this selection of popular natural emerald jewelry.

Genuine emerald comes in various hues of green, from dark to light tones.

Fake emeralds are also green, but some of them have additional, non-green undertones such as yellow. If you spot such secondary hues, be aware that the “emerald” might in fact be another stone such as olivine or green garnet.

Exposing a stone to light can also give you a clue whether the gem might be fake. When lit, real emerald doesn’t exhibit intense colorful flashes (also called fire); natural emeralds can have some fire, but it is minimal.

Some fakes, however, sparkle in all colors of the rainbow, and this is a sign that the stone may not be a real emerald.

Real Emeralds and Their Facets

If the stone you are looking at is faceted, take a close look at the facets. Real emerald is relatively hard, and the edges of its facets should not show strong signs of wear.

Since some emerald imitations are made of softer materials, such as glass, the facets of such stones become less sharp with time and look worn.

You can see what real emeralds look like on James Allen’s website as well as in the genuine emerald collection of Leibish & Co.

Genuine emeralds are not perfectly clear as they have natural imperfections within their structure.

If you look at such a stone from a close distance, preferably with a loupe, you should see at least some flaws such as lines, bubbles, crystals, etc. High-clarity emeralds will have fewer of these, but those stones will still not be perfect.

In contrast to real emeralds, artificially created imitations usually look too perfect and clean, and if they are also relatively cheap, then this is a giveaway sign that you may be dealing with a fake.

Keep in mind, however, that synthetic emeralds can also look very clean and be quite affordable, although they are not technically considered fakes.

Look Out for Emerald Doublets and Triplets

Doublets and triplets are terms that refer to gemstones created by adding one or two additional layers of material to a real stone to make it look bigger and more valuable.

Real emeralds are sometimes augmented in such a way by adding glass or plastic layers on top of the genuine stone; these materials are often colored in a more intense green to make the stone’s color look more attractive.

To check if this is the case, look at the stone from the side: If you can see that the gem is actually made up of layers, then you are likely to have a doublet or triplet.